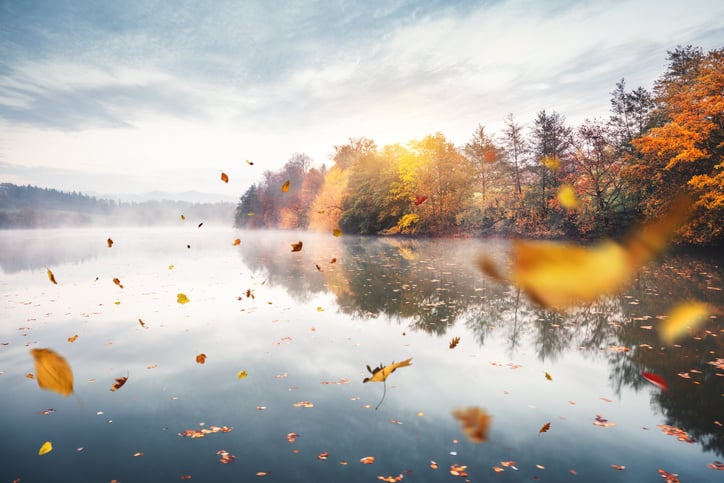 Meme stocks. Non-fungible tokens (NFTs). Robinhood. It seems that there's a new way to invest or an asset to buy wherever we turn. This year alone, these investment trends have moved the markets more than once. For example, in January, investors witnessed GameStop’s (GME) stock price gain over 800% in less than a week following social media chatter on Reddit. Similarly, in June,  AMC Theatres (AMC) gained more than 500%. Why? There appears to be a shifting investor base, recognition of value, and influence from social media.

Perceived value is also behind the growth of NFTs. For example, would you pay nearly $3 million to own the rights to the very first Tweet on Twitter? Or over $69 million for a digital artwork that is a picture of all the artist’s 5,000 other works? For two buyers, the answer was a resounding yes.

What do these examples highlight? In a nutshell, many investors are vying for old and new asset types and banding together to follow the momentum of social media hype. So are they changing the rules of investing?

Past markets have embraced change

The New York Stock Exchange started in 1792. But market participation wasn't widespread until the Securities Act of 1933 and the Securities and Exchange Act of 1934 established securities registration, and rules for fair disclosure and a secondary trading market.

Since then, there have been substantial modifications. In the early 1970s, index mutual funds came to the market, and two decades later, the first ETF was traded. After computers survived Y2K, decimalization of stock quotes (instead of fractions) narrowed trading spreads. Then eight years later, high-frequency trading hit new highs as computer algorithms exploited millisecond differences in the timing of trade settlements. These are just a few examples. So, to say that changes to the way markets operate are nothing new is an understatement!

But is this time different? In the words of Sir John Templeton, “The four most dangerous words in investing are ‘This time it’s different.’” But maybe, this time, it is.

Some things are different…for now

Three trends appear to be at the forefront of recent stock market shifts.

Trend #1: Restricted activities. The worldwide pandemic changed the way all people live and conduct business. Whether it's remote work and learning, curbside pick-up and home delivery, or access to newly released movies at home, the way we live has fundamentally changed.

Some of the aftereffects will likely remain. Not all workers will return to the office setting, and if they do, many will participate in a hybrid model. At the same time, other pandemic-induced behaviors will likely wane. We've already seen some normalcy return to restaurants and sporting events.

Trend #2: Government largesse. The U.S.’ balance sheet was already large. Then the pandemic hit, and it has grown by leaps and bounds. Expanded unemployment insurance, stimulus checks, and the Paycheck Protection Program, among others, provided much-needed funds to individuals, families, and small businesses. Between March 2020 and August 2021, the Federal Reserve’s balance sheet has nearly doubled—from $4.3 to $8.3 trillion.3And even compared to the $1.8 trillion assistance levied in response to the 2008 Global Financial Crisis, the $5.9 trillion COVID relief enacted-to-date is significantly greater.4

But many of the subsidies and government aid have already ended, while others will cease over the coming months.

Trend #3: Investing open to all. The trading platform Robinhood launched in 2013 with a mission to “democratize finance for all… to make investing friendly, approachable, and understandable for newcomers and experts alike.” How? Primarily by offering zero trading fees. And it's worked. Robinhood has amassed 18 million users in eight short years, roughly half the size of behemoth Charles Schwab.5 Robinhood is not alone—many other brokerages, including Schwab, have zero or low trading fees. Moreover, in 2020, the number of brokerage accounts and the trades per account saw a massive uptick. So it appears technology has unlocked investing, giving more people access to trading stocks and other assets.

But regulators are also cracking down. Special Purpose Acquisition Companies (SPACs) are garnering regulatory scrutiny. At the same time, cryptocurrencies are the focus of SEC chair Gary Gensler. Governments around the world are also taking a closer look. For example, China has all but banned Bitcoin mining in its fight against the use of cryptos.

What’s it mean for your portfolio?

We believe these trends can impact investing in two ways. First, a broader investor base engaged in do-it-yourself investing and meme stock trading may cause security prices to overshoot on both the up and downside. In other words, stock prices may be bid higher or sold more readily as investors follow each other’s moves. This overshooting can potentially create opportunities for active managers to take advantage of mispricings. Our takeaway: Be opportunistically aggressive.

Second, it is our view that more investors and those flush with capital are a recipe for rising asset prices. Here’s why. More money chasing few assets typically drives up prices. In turn, higher-priced investments generally lead to lower returns. Our takeaway: Investors should be adaptable in valuing stocks by adjusting how much they’re willing to pay for a company’s future cash flows. They should scrutinize a business’ quality of growth, unit economics, competitive advantages, and management team when making long-term investment decisions.

So has investing changed?

Market manias are nothing new. They may provide increased volatility and portfolio turnover but also more inefficiencies and opportunities. However, we believe there has been a fundamental shift in the cost of capital and, therefore, expected returns going forward may be lower. This requires more company-specific scrutiny by active managers—to differentiate the long-term winners from the short-term spikers.

In other words, we adhere to a formula for value creation that is grounded in owning quality companies that generate value for customers and convert their competitive advantage into durable cash flow streams. So, while some things may have shifted—as they tend to do in a dynamic marketplace—a sound philosophy grounded in quality companies, we believe, stands the test of time, regardless of the latest investment trends.

The content in this article is provided for informational purposes only, reflects our general views on investing, and should not be relied upon as recommendations or financial planning advice. We encourage you to seek personalized advice from qualified professionals regarding all personal finance issues.

Access to Motley Fool Wealth Management (“MFWM”) is only available to clients pursuant to an Investment Advisory Agreement and acceptance of MFWM's Client Relationship Summary (PDF) and Brochure (PDF - 204 KB). You are encouraged to read these documents carefully. All investments involve risk and may lose money. MFWM does not guarantee the results of any of its advice or account management. Clients should be aware that their individual account results may not exactly match the performance of any of our Model Portfolios. Past performance is no guarantee of future results. Each Personal Portfolio is subject to an account minimum, which varies based on the strategies included in the portfolio. MFWM retains the right to revise or modify portfolios and strategies if it believes such modifications would be in the best interests of its clients.

During discussions with our Certified Financial Planners, they may provide advice with respect to 401(k) rollovers into accounts that are managed by MFWM. Such recommendations pose potential conflicts of interest in that rolling retirement savings into a MFWM managed account will generate ongoing asset-based fees for MFWM that it would not otherwise receive.

You’ll speak with one of our certified financial planners (not a salesperson or customer representative). We’ll learn more about you, and put together a plan that’s tailored to your unique goals and circumstances. 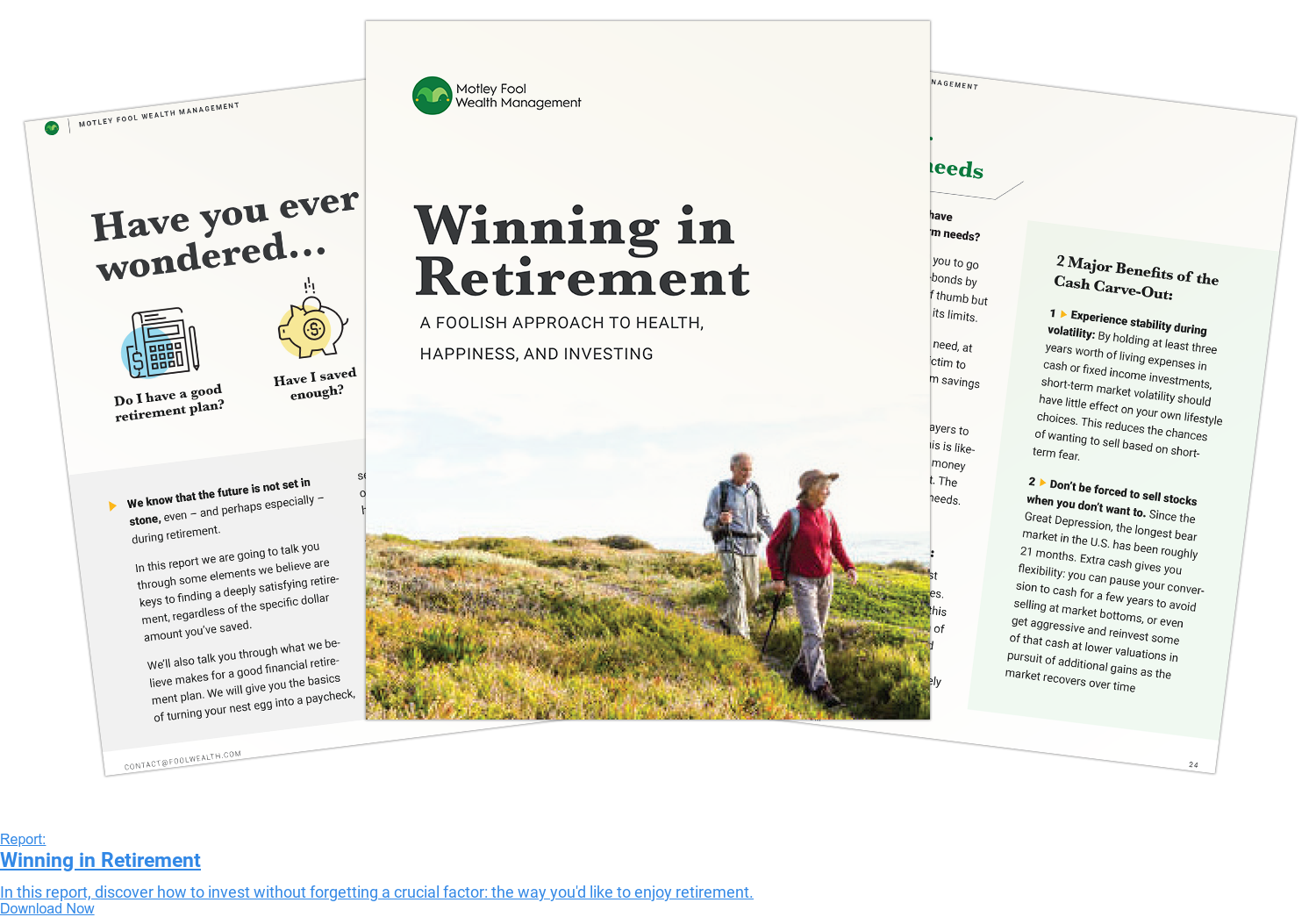 Access to Motley Fool Wealth Management is only available to MFWM clients pursuant to an Investment Advisory Agreement and acceptance of our Client Relationship Summary and Brochure (Form ADV, Parts 2A and 2B). You are encouraged to read these documents carefully. All investments involve risk and may lose money. MFWM does not guarantee the results of any of its advice or account management. Clients should be aware that their individual account results may not exactly match the performance of the Model Portfolios. Past performance is no guarantee of future results. Each Personal Portfolio is subject to an account minimum, which varies based on the strategies included in the portfolio. MFWM retains the right to revise or modify portfolios and strategies if it believes such modifications would be in the best interests of its clients.